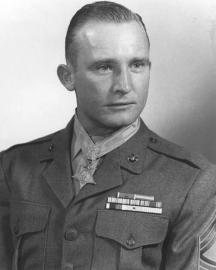 The Lexington Marine Corps League gathered Saturday morning at the grave of Medal of Honor recipient Harold "Speedy" Wilson, at Woodridge Memorial Park off Corley Mill Road in Lexington. The event is an annual tradition put on by the Marine Corps League, and is meant to honor Wilson's last wish of coming together at his grave every Memorial day weekend, to enjoy a cold beer and tell his story.

"Many of us knew Speedy, and we made a promise to him that we would visit him and have a beer with him every year. We are honored and proud to do this," said Commandant of the Lexington Marine Corps League, retired Master Sergeant Beulah Scott.

Also in attendance were the Scouts of America troop 307, Saxe Gotha Presbyterian Church. At the close of the ceremony, the troop spent a few hours placing flags on veterans' graves.

Wilson's sons, John and Harold Wilson Jr., were also in attendance. John Wilson, a retired US Army veteran, spoke highly of his father and said he was an honorable and quiet man. John explained that his father "never wanted the spotlight or fame" for his actions in Korea.

Technical Sergeant Harold "Speedy" Wilson earned the Medal of Honor for heroism and actions from April 23 and 24, 1951. When Wilson's outpost was overrun by enemy forces, and under intense enemy machine gun and mortar fire, he assisted survivors back to friendly lines and resupplied ammunition to the front. After being shot twice, he refused medical attention and continued to resupply his men, shouting words of encouragement and turning the tide of the battle. He sustained several more injuries from mortar fire, and unable to use either of his arms, again refused medical attention and continued resupplying his men. Only after the battle was over, and victory was assured, he walked a half mile, unassisted, and finally submitted himself to medical treatment. Wilson passed away March 29, 1998, of cancer.

For gallantry and intrepidity at the risk of his life above and beyond the call of duty while serving as platoon sergeant of a rifle platoon attached to Company G, in action against enemy aggressor forces on the night from 23 to 24 April 1951. When the company outpost was overrun by the enemy while his platoon, firing from hastily constructed foxholes, was engaged in resisting the brunt of a fierce mortar, machine-gun, grenade, and small-arms attack launched by hostile forces from high ground under cover of darkness, T/Sgt. Wilson braved intense fire to assist the survivors back into the line and to direct the treatment of casualties. Although twice wounded by gunfire, in the right arm and the left leg, he refused medical aid for himself and continued to move about among his men, shouting words of encouragement. After receiving further wounds in the head and shoulder as the attack increased in intensity, he again insisted upon remaining with his unit. Unable to use either arm to fire, and with mounting casualties among our forces, he resupplied his men with rifles and ammunition taken from the wounded.

Personally reporting to his company commander on several occasions, he requested and received additional assistance when the enemy attack became even more fierce and, after placing the reinforcements in strategic positions in the line, directed effective fire until blown off his feet by the bursting of a hostile mortar round in his face. Dazed and suffering from concussion, he still refused medical aid and, despite weakness from loss of blood, moved from foxhole to foxhole, directing fire, resupplying ammunition, rendering first aid, and encouraging his men. By his heroic actions in the face of almost certain death, when the unit's ability to hold the disadvantageous position was doubtful, he instilled confidence in his troops, inspiring them to rally repeatedly and turn back the furious assaults. At dawn, after the final attack had been repulsed, he personally accounted for each man in his platoon before walking unassisted one-half mile to the aid station where he submitted to treatment. His outstanding courage, initiative, and skilled leadership in the face of overwhelming odds were contributing factors in the success of his company's mission and reflect the highest credit upon T/Sgt. Wilson and the U.S. Naval Service.